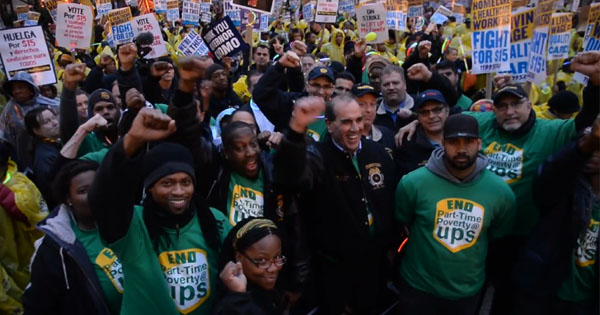 Runaway corporate greed is threatening our wages, our jobs, our pensions, and our families.

Ninety-nine percent of new income in this country is going to the richest 1% of the nation. The richest families in America now have as much wealth as all of the rest of us combined.

The Teamsters Union—and the labor movement—are our only brake against the corporate race to the bottom.

Instead, Hoffa-Hall have surrendered contract givebacks that enrich the one percent.

UPS CEO David Abney has tripled his pay to $11.3 million under the concessionary contract negotiated by Hoffa-Hall.

Under that same contract, starting pay for part-timers was frozen at $10 an hour through 2018.

Hoffa appointed hedge fund mogul Harry Wilson to be our union’s representative on the board of directors of YRC, our union’s largest freight employer.

Wilson helped the corporation broker concessions with the union and the banks. When the concessions deal went through, YRC paid Wilson a $5 million bonus.

Real Teamster leadership means fighting for the members, not brokering concessions for the one percent.

Fred Zuckerman and Teamsters United will fight for good wages and benefits and a better quality of life for Teamsters and working families.