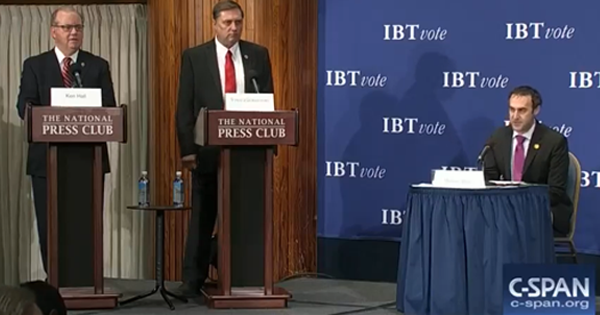 Click here to watch the debate as it appeared on C-Span.

Rank-and-file Teamsters traveled on their own time & their own dime from as far as 700 miles away to watch the debate first-hand. Hoffa couldn’t be bothered to travel the 1.3 miles from his office to the National Press Club where the debate was held.

Throughout the evening, Zuckerman focused on the key issues that impact working Teamsters:  organizing in our core industries, saving Teamster pensions, and ridding our union of corruption.

In his usual style, Hall dodged the real issues facing Teamster members and got to work right away spinning Hoffa’s failed administration into victories for the members.

While Zuckerman stood proud against corruption, Hall defended crooked union officials and stood by Rome Aloise, Hoffa’s running-mate who is known to have taken bribes from employers in exchange for contract concessions.

Zuckerman demanded that the Executive Board lead by example by taking action when confronted with corruption, while Hall asserted that corrupt officials are “innocent until proven guilty” in a court of law.

Ken Hall repeatedly accused Fred Zuckerman of being just an “angry Teamster.” Fred agreed. Like hundreds of thousands of Teamster members across the country, Zuckerman is angry. He’s angry about the concessions being made at UPS during a time of record profits. Freight concessions and declining industry standards that our union is doing nothing about. Pension funds going bankrupt due to 17 years of negligent leadership. Top union officials who collect multiple salaries while selling out the members with sweetheart company deals.

Hall says Teamsters are satisfied with the way things are going.

Teamster members have shown time and time again that we are not satisfied. Teamsters Voted No on the UPS contract in 2013. Carhaulers voted down the last tentative agreement. Freight Teamsters are suffering through a 15% wage cut with no new organizing. Hundreds of thousands of current and retired Teamsters who are unsure of their futures due to pension mismanagement.

Ken Hall says members should be happy with what they have – and that the reason Teamster participation in elections is so low is that members are satisfied.

Fred Zuckerman knows better. A real Teamster and a real leader, Fred challenged every Teamster member to join the fight for a better future by electing new leadership for a new direction this fall.