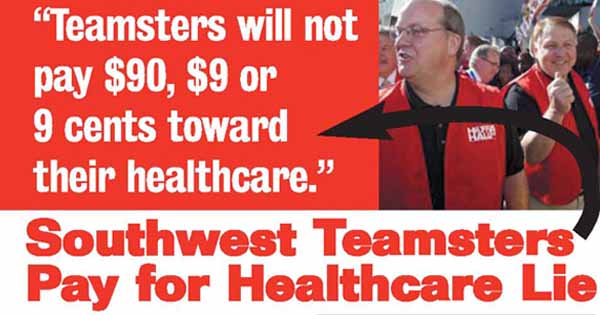 UPS is making record profits under the contract negotiated by Hoffa-Hall.  But UPS Teamsters in the Southwest got healthcare cuts and a lower pension.

Download the new leaflet that explains the healthcare and pension cuts for UPSers in the Southwest.

UPSers in the Southwest voted no against the first contract offer to protect their healthcare. Instead, Hoffa-Hall stuck members with an inferior health plan and reduced their pensions too.

We need Teamster leadership that will fight for our benefits. It’s time for Hoffa-Hall to go.

But after the no vote, Hoffa-Hall didn’t negotiate one new dime from UPS to pay for the more expensive plan. The money had to come from somewhere and it’s coming from members’ pension contributions.

Under the contract, UPS has to pay $1 per hour more every year into members’ benefits. This money was supposed to be split 50-50 between healthcare and pension.

Instead, in the first three years of the contract, $2.75 went to pay for the inferior new health plan and just 25 cents to fund members’ pensions.

How Much the Cuts Will Cost Teamsters

UPS is putting $1.25 less per hour into your pension than what was originally negotiated. The result will be a lower pension when you retire.

For every year you work, your annual pension will be $312 lower. If you work ten more years, you will lose $3,120 in pension payments every year. These cuts really add up.

Teamsters in SoCal and the Southwest are the only UPSers in the West taking this pension hit. Everyone else in the West got higher pension contributions without any cuts to their healthcare.

Members  voted no to save our health benefits. Instead, Hoffa and Hall stuck them with inferior healthcare and reduced our pensions going forward, too.

Say no to benefit cuts and yes to new leadership. Vote Fred Zuckerman and Teamsters United.