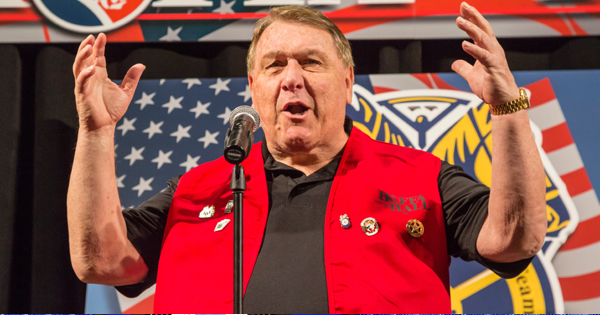 Positive changes to the Teamster Constitution were rejected out of hand by the Hoffa-dominated Teamster Convention this past week. In fact, most of them were not even allowed to be heard by the delegates.

Fred Zuckerman and a number of delegates took the floor to introduce amendments to the Constitution to:

Hoffa allowed only the amendment on strike benefits to come to the floor. Hoffa’s floor whips instructed delegates to vote no and the motion was defeated.

When Fred Zuckerman tried to introduce the other amendments, Hoffa stopped the convention to “caucus” with his handlers and staff. Hoffa returned to the mic and declared Zuckerman out of order.

Brother Zuckerman held up a revised schedule sent to him by the IBT Legal Department that very day that said when Hoffa would accept amendments from the floor.

Even though Hoffa controlled the votes of over 85% of the delegates, he refused to allow the amendments – all properly submitted to the Constitution Committee over a month ago – to be heard.

In a five-day Convention, Hoffa allowed just 42 minutes to discuss the Constitution that governs the union. All but one minute of that time was controlled by the Hoffa-Hall administration.

“I was at the microphone to change our Constitution so that no General President could ever shove a contract down our throats after we voted no,” said Richard Hooker, an elected delegate from Local 623. “The members of my local in Philadelphia sent me here to make their voices heard on this issue and Hoffa wouldn’t even let us speak,” Hooker said.

Kim Schultz, a delegate from Florida Local 2011 and candidate for Southern vice president on the Teamsters United team, said, “I was at the mic to second the amendment to guarantee fair elections. Our delegate election was stolen by appointees of International VP Ken Wood. We only got a fair rerun because election supervisor stepped in, and then we won it by 3-1.”

“I was shocked at how they ran the Convention, and our members will hear about it,” Schultz said.

The election this fall for International Union officers will be independently supervised and every member will be mailed a ballot.

“They can shut us down at the microphone but they can’t stop us from voting them out in October,” Nick Perry, an elected delegate from Columbus Local 413 said.