Hoffa Delegates Boo Call for Leadership that Looks Like the Membership 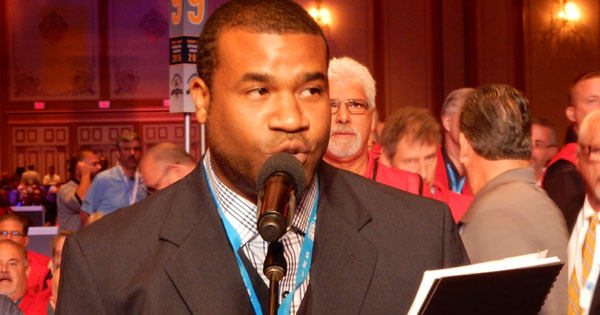 Hoffa-Hall supporters booed and shouted down a freight Teamster who spoke out at the Teamster Convention for International Union leadership that looks like the membership.

“The General Executive Board of our union should look like the membership,” said Harold Armstrong, Jr., a freight Teamster and elected Convention Delegate from Memphis Local 667.

Hoffa-Hall supporters loudly booed Armstrong, but he shouted to make his voice heard.

“We need more sisters in our union leadership,” said Armstrong who was nominating Kimberly Schultz, for Southern Region Vice President.  “We need more people of color on the GEB. One woman and one African-American in our top leadership doesn’t cut it.”

The Hoffa-Hall slate includes only one woman and one African-American out of 27 candidates.

Teamsters United believes a strong union involves everyone and that the Teamster leadership at all levels should reflect the diversity and talent of the Teamster membership.

As General President, Fred Zuckerman will hire skilled Teamsters and build a diverse staff of International Representatives and organizers to fight for all our members.

Click here to read more on Fred’s stand that a strong union involves everyone.