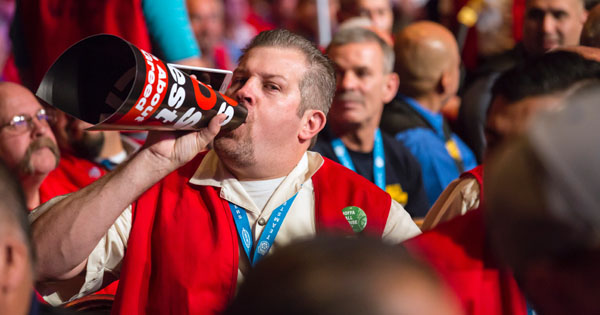 Hoffa delegates booed, threatened and jeered Teamster organizers at our own union Convention. Their actions caught on video are fodder for union-busters and the wrong image for our union.

“As an organizer, you don’t shout. You listen. You build consensus. You build unity,” Santos continued.

“Listening and bringing workers together. That’s how you build union power in an organizing drive,” Santos said. “We need more of that in this union and at this Convention. God bless all Teamsters.”

“In organizing drives we tell workers that by becoming a Teamster they will have a voice on the job and in our union,” said Jerry Yarbrough, a freight Teamster and candidate for At Large Vice President.

“When you boo a Teamster organizer, what message are you sending to the workers we are trying to organize into this union?” Yarbrough asked.

Yarbrough’s remarks were drowned out by unrelenting boos. He stood strong and warned the Hoffa delegates, “I am not intimidated by your booing or your bullying. But this is the wrong image for our union. It is a bad image that helps the union busters, not Teamster organizers.”

Yarbrough is right. Don’t be surprised if union-busters use the footage of Hoffa delegates’ disgraceful actions in future organizing drives against our union.