The results of the tainted election have been thrown out. A new ballot will be mailed to every Local 2011 member soon.

The Trusteeship doesn’t get it. They think Local 2011 belongs to them.

Federal law prohibits taking employer or union resources and using them to campaign.

But FDOC Teamsters Strong took the Local 2011 Facebook page that belongs to the membership and converted it into a page to promote their own political agenda.

Using union resources for your own campaign? That’s wrong, not strong.

Local 2011 belongs to the members. Our dues and union resources should be used to fight for FDOC workers—period.

If you agree, make your voice heard.

Vote FDOC Teamsters United in the new mail ballot election. At the Teamster Convention, we will fight for:

It is unfortunate that our first election in the Teamsters was tainted by irregularities and overturned. But we have a chance to set things right and build a union of, by and for FDOC Teamsters.

If you want to help—or if you have a question—please get in touch with us at info@teamstersunited.org 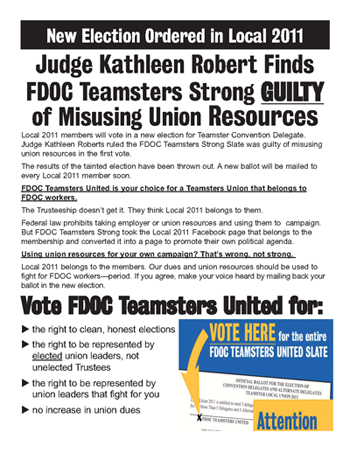