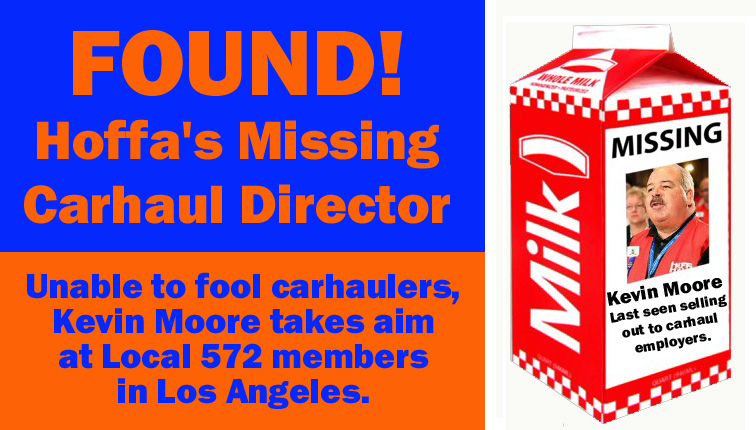 Carhaulers who have been without a contract since August may wonder what IBT Carhaul Director Kevin Moore is up to.

Instead of bargaining a contract, Moore is in Los Angeles, campaigning for a Hoffa Vice President who was caught rigging a convention delegate election.

Moore failed as a union contract negotiator—members voted down his concessionary contract in carhaul by 87 percent.  So he’s trying a new gig.

He is in LA campaigning for Rick Middleton whose delegate election is being rerun because Local 572 officials took employer support, misused union resources, and directed management to violate members’ rights in the first vote.

Middleton can’t get help from the bosses this time. So he has called in officials from the International Union payroll like Kevin Moore and Ron Herrera to go to worksites and campaign as “Members for Middleton.”

Kevin Moore’s compensation from the Teamsters last year was $240,294. Hoffa VP Ron Herrera and his $257,771 paycheck has been campaigning in Local 572 too.

Throw in Middleton and his $310,830 paycheck and a business agent or two and you’ve got well over $1 million in dues money stumping for votes at any given campaign stop.

Don’t officials like Moore and Herrera have real jobs to do for all the dues money they are being paid?