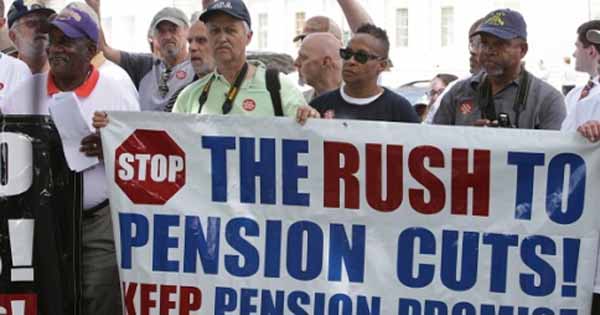 Teamsters are outraged about pension cuts in the Central States and the the Hoffa-Hall PR machine is doing damage control.  Hoffa issued a statement claiming he is “outraged” by the cuts.

It’s a strong statement. But actions speak louder than words.

Consider these facts and decide for yourself:

A look at the Hoffa-Hall record shows they have done nothing to protect Teamster pensions—and plenty to accelerate the pension cut crisis.

But there is one Teamster Pension Plan that Hoffa and Hall have taken decisive action to protect: their own.

Hoffa and Hall increased boosted funding to the Teamster Retirement and Family Protection Plan, which covers International Union officers and staff.  They put $16 million of dues money into it last year, and will do the same this year.

When Hoffa is voted out office a year from now, he will be handed a pension of about $150,000 a year.  Do you think Hoffa and Hall will take a 50% cut on their pension like members and local union officers in the Central States?

Teamsters, active and retired, can take a stand and make a difference. Vote No on the proposed pension cuts in the Central States and vote out Hoffa-Hall in 2016.