Teamsters United supporters are making contract proposals to take on the biggest problems. Proposals must be submitted by local unions to the IBT by the end of August. 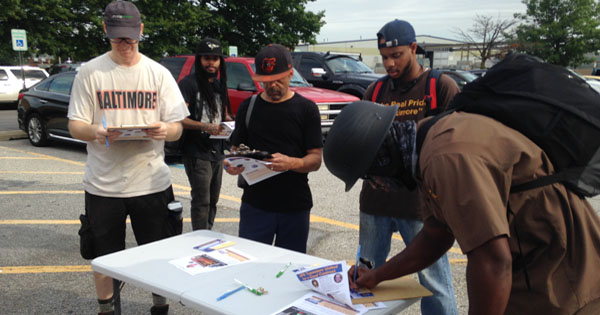 Thousands of Contract Unity Pledge cards have been filled out by members from across the country, to say no to harassment and contract givebacks.

With the IBT’s deadline for proposals approaching at the end of August, members are taking proposals to their local union halls and proposal meetings, and they are continuing to unite members to fight for a good contract.

Anthony Mosby, Local 322, proposed monetary penalties for harassment. “What’s the point of grieving harassment when all the company needs to do is give a phony apology?”

Before the proposals meeting, Anthony and activists from his local collected pledge cards at the gates and continue to sign members up to get updates about the contract campaign.

“We need to spread the message that we need to start getting organized now to fight for a good contract if we want things to change at UPS,” Anthony said.

In Des Moines Local 90, Todd Hartsell and other activists proposed that the 9.5 list be opt-out instead of opt-in. He and others proposed a series of changes to 9.5 language at the Local 90 meeting last weekend.

“When we read our proposals from the floor, members were enthusiastic to hear strong, enforceable language. Our drivers agreed that the 9-5 language just doesn’t work,” said Hartsell, but the action didn’t stop there.

“About forty Teamsters came out to the meeting. We wanted to make sure members who weren’t at the meeting can be involved too. The pledge cards are a good way to show the company and the union we’re united, and to get more members to participate.”

Contact Teamsters United if you have questions about proposals you want to make, or to get involved with the Contract Unity Pledge drive.

With less than a year to go, Teamsters United is building the network it will take to stop contract givebacks. Click here to make a donation and fuel the fight for a good contract.